What is the lowest temperature ever officially recorded in Houston?

In detail, official temperature records for Houston date back to 1883 from multiple “official” weather stations.  These locations have included:

KIAH is currently and has been the official weather station for the city of Houston since around the time the airport opened in 1969.  Here is the history of record keeping in Houston from the National Weather Service:

“The history of the Houston office can be traced as far back as 1881, when a cotton station (in an unknown location in Harris County) was used as a base for taking weather observations. As the city of Houston grew, the need for a Weather Bureau Office resulted in the establishment of the Houston office downtown on September 16, 1909. Between 1909 and 1968, the Houston Weather Bureau office occupied three separate locations in the downtown area – the Stewart Building (at Preston and Fannin Streets), the Shell Builiding (at Texas and Fannin Streets) and its last location downtown at the Federal Building (at Franklin and Fannin Streets). The expanding needs of the old Weather Bureau forced a move out of the downtown area. In 1970, the National Weather Service moved the Houston area office to Alvin (southwest of Houston). Around that same time, as a part of the move out of downtown, the weather observations part of operations moved to the its now current site at Houston Intercontinental Airport in northern Harris County.”

“The choice to have Bush Intercontinental as the official recording station came from the aviation community.  There was pressure to have observations at the airports as the airline industry grew. Since human observers were required to take the readings, it did not make financial sense to keep multiple observation sites in place, so downtown office observation sites were moved to the airports.  The switch was not driven by climate parameters but rather by aviation interests.” 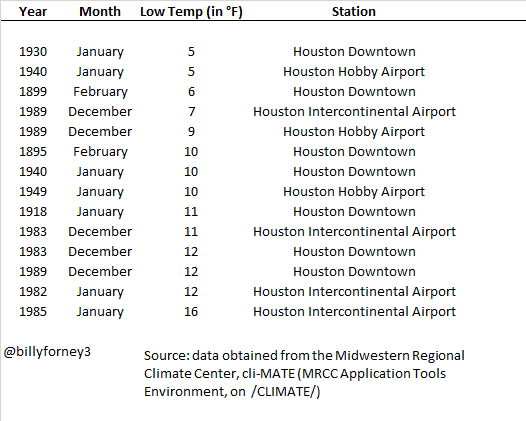 Interesting to note that Houston has never seen below-zero temperatures in recorded history.  In fact, temperatures have only been below +10°F on four days since 1883 (note: the two readings of +7°F and +9°F in December 1989 occurred on the same day at two different locations).